Welcome to my instant pot chicken tikka masala recipe. Restaurant quality and ready in less than half the time of traditional cooking.

Succulent marinated chicken in a tasty sauce and a perfect blend of natural spices. Pot in pot rice makes this recipe the perfect, easy one-pot meal. Tikka masala is one of my families all-time most requested curry recipes. 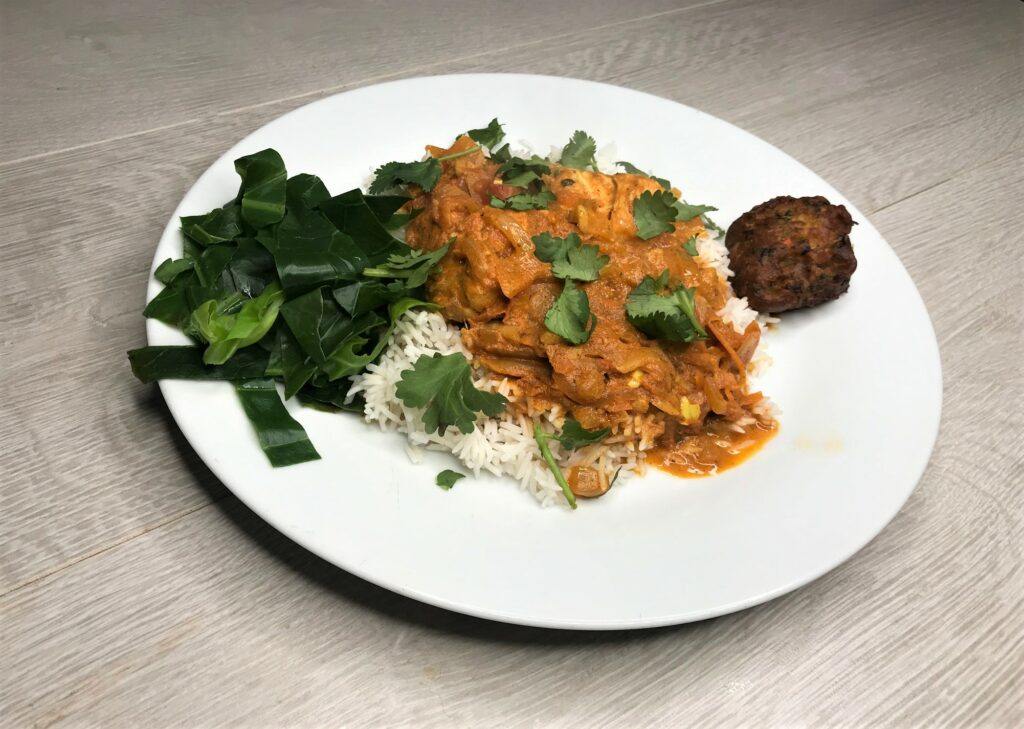 What is chicken tikka masala?

Traditionally chicken tikka masala would be boneless chunks of chicken marinated in yoghurt and spices. This would then be roasted in a clay oven and served with a rich creamy sauce.

I have tried to keep to this formula, however modified for the instant pot.

Chicken tikka masala has many similarities with butter chicken, both in appearance and the method used to make it.

Add all of the marinade ingredients together and mix together with the diced chicken. Cover and leave in the refrigerator for at least 1 hour (I usually try to leave it overnight). If you are going to do pot in pot rice, rinse your rice in a sieve just before starting to cook. Leave it under running cold tap until the water comes out almost clear. Set the rice aside and then put the pot on saute.

Now add whichever oil you are using (I used ghee, but have also made this with coconut oil - other vegetable oils will also work well). Now add the onions and fry until softened (around 5 minutes). Add the garlic followed by the remaining spices. Season to taste and then add the chicken and all of the marinade (the smell at this point will be amazing!). Cook for around 3 minutes and then add the grated carrot, tinned tomatoes, tomato puree and coconut milk. Stir everything together.

If doing pot in pot rice, add a trivet which sits above the curry and add the rice in a suitable bowl with boiling water. Put the lid on the instant pot and set on high pressure for 7 minutes. when the time is up, leave under pressure for another 9 minutes and then do a quick release. When the pin drops remove the lid followed by the perfectly cooked rice and the trivet. Stir the curry together and serve with a garnish of coriander (cilantro) if desired. 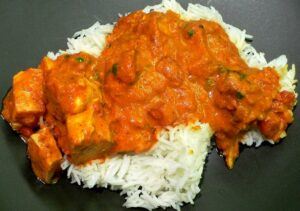 What are the ingredients for instant pot chicken tikka masala?

I know it looks like a big list, but the recipe really is easy and most of the spices will be things you have in your store cupboard.

What to serve with instant pot tikka masala 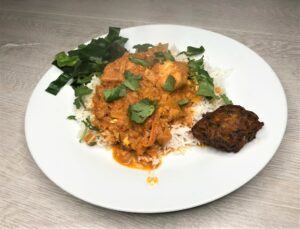 I served my tikka masala with a garnish of coriander and a side serving of cabbage and Indian snacks (samosas and bhajis). You could also serve with naan bread or chapatis.

My tikka masala is made using all-natural ingredients and has no added sugars. It contains most of the required daily nutrients and in my opinion, is a healthy meal option.

Are there any substitutions I can do if I don't have all the ingredients?

My tikka masala is a fairly flexible recipe and you can try any of the following changes.

Yes, my tikka masala is keto-friendly, however you won't be able to serve with rice or the Indian snacks as they are heavy in carbohydrates.

My recommendation would be to serve with cauliflower rice and a leafy green vegetable.

Is it possible to scale the recipe up or down?

Yes, it would be fine to half the recipe in any of the instant pots. You could double the recipe with any of the pots 6l (6qt) and above. In either case, all timings would remain the same. 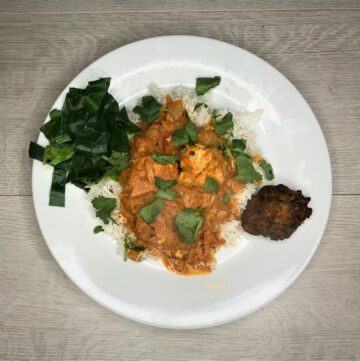 I made mine using an 8l (8qt) instant pot and I have also made it in the 6l (6qt) pot. I haven’t made it in the 3l (3qt) pot, but I’m sure it would work well with half of the ingredients and the same timings. It would probably be better not to try pot in pot rice in the 3l pot as there won't be sufficient room.

Leftovers will keep well for up to 5 days in the fridge provided they are heated up correctly. You can also freeze them successfully for up to 6 months. In fact, leftovers will almost certainly taste better than when the curry is fresh as the flavours have more time to develop.

For some interesting information about the history of chicken tikka masala, please click here.

If you have enjoyed my recipe for instant pot chicken tikka masala, please take a look at some of my other great curry recipes:

If you have any comments, questions or suggestions, please leave them in the box below and I would be delighted to help.

Hi, I'm ANDY AND I HOPE YOU WILL ENJOY MY SIMPLE WEBSITE DEDICATED TO THE INSTANT POT.